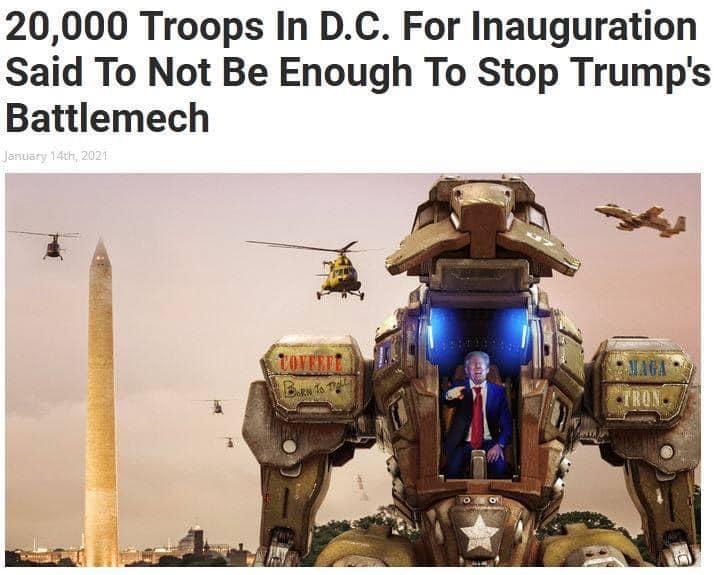 EDIT: guess I was wrong about what I hoped for, and the crooks forced their way in. Guess we'll see what happens.

In all seriousness: Trump is going to stay in for the next 4 years, and the swamp will be drained for real this time because they've been caught in a sting. Considering the governments recent actions like their useless 2nd "impeachment", why would they do that when Trump is supposedly almost out??

On the off chance it wasn't a sting, this is how dictators get into power to inflict Communism on everyone. If you need all those soldiers to protect you from people when you "won fairly", then you didn't win. Trump's recent statements signify that he is committed to ending useless wars around the world too. Why would he do that if he was going to be out soon?? And here's a good quote I read from a vet recently about the current stuff in DC:

"I'm a 20 year Army Vet and Infantryman who served 4 years overseas, twice in combat, as a sworn oath to our Constitution, in wars directed by our politicians, who don't follow the Constitution. The irony of that makes me want to fuckin' puke."

It’s okay to be upset and angry, but don’t misplace your anger. Be angry at the main stream media, big tech and business who censor for wrongthink, and at most of our politicians who have been lying to you this entire time. How so?

༼ຈل͜├┬┴┬┴ Pss! Hey kid, consider signing up to my email list and RSS feed, Brighteon / BitChute channels, or following me on my social medias.

Stay updated with tips by subscribing to my rss 2 or atom 1 feeds, or signing up to my email list.